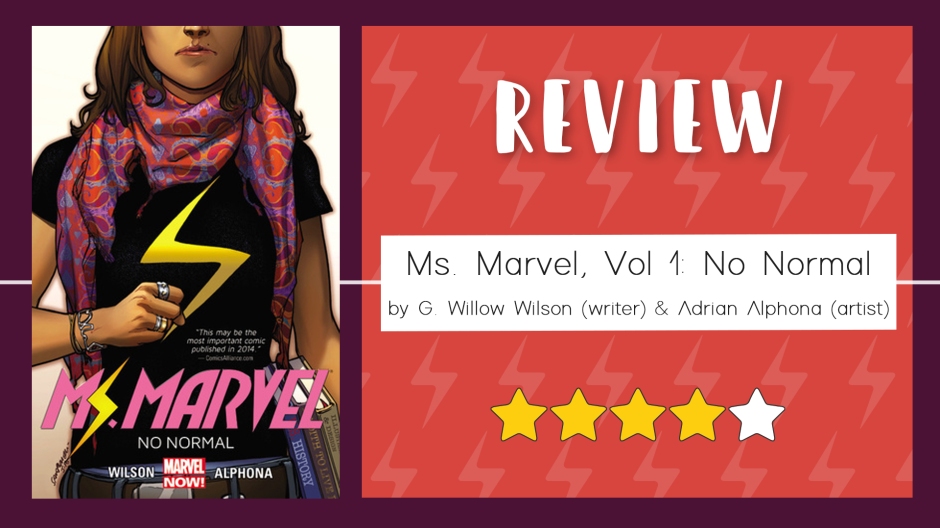 Kamala Khan is an ordinary girl from Jersey City — until she’s suddenly empowered with extraordinary gifts. But who truly is the new Ms. Marvel? Teenager? Muslim? Inhuman? Find out as she takes the Marvel Universe by storm! When Kamala discovers the dangers of her newfound powers, she unlocks a secret behind them, as well. Is Kamala ready to wield these immense new gifts? Or will the weight of the legacy before her be too much to bear? Kamala has no idea, either. But she’s comin’ for you, Jersey!

Ms. Marvel was a solid origin story for Kamala Khan, the first Muslim character to headline their own comic book. Accompanied by lively art and strong characters, Ms. Marvel sets a strong beginning for a fresh new young adult hero who will surely become a role model for many. 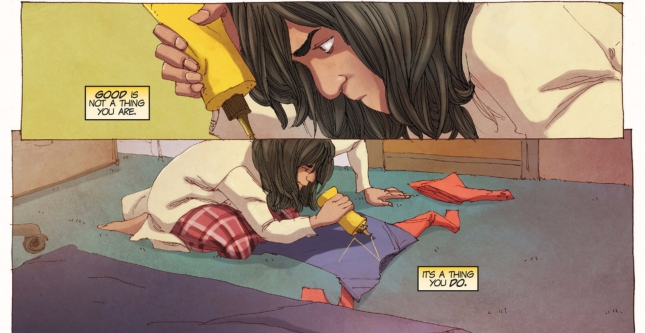 The art is versatile and fun due to Kamala’s abilities and her sense of humor, so there’s not a moment to be bored. Some frames held funny background sequences or details, which I kept looking forward to while reading—definitely an added bonus to the story.

I was impressed by how Kamala’s complexity as a character shined through in different ways throughout the story. She was introspective during her journey, which dealt not only gaining superpowers, but also maintaining her and her family’s beliefs of what is good and what is wrong while keeping her identity secret from them. Also, there was an added lightheartedness through Kamala’s humor here and there. Finally, it was interesting to see how she balanced her personal insecurities and fought societal standards and how these affected directly her abilities.

The plot, though nothing groundbreaking in terms of superhero origin stories, was carried out nicely thanks to the characters. Kamala’s overprotective parents, the bullies from school, and Kamala’s best friends all brought something to the table and had their part in her growth. However, I must admit that it was confusing at times and I don’t know if it’s because I had no previous knowledge of other Ms. Marvels or if it was just the way this was written. Additionally, sometimes it was hard for me to follow the story on the page because I didn’t know where to look or what to read first, though this might be because I read it on the Kindle app on my phone.

Nevertheless, I’m excited to see where her story is going, especially since now there is to be a series adaptation.